The Franks are not often associated with the use of runes as once converted, they swiftly took to the quill and velum. The script favoured by the Merovingians for this purpose is known as Merovingian Miniscule and many ornate codices make good use of this oftentimes illegible script. However, at least three archaeological findings have shed some light on the runic tradition of the Frankish people: The Bergakker scabbard, Borgharen buckle and the Charnay fibula.

In an effort to reconstruct a usable model of Frankish runes, TFA has worked to identify the various characters from these three finds, relying on academia and putting preference on those characters that are “most likely” to have been carved by the hand of a Frank. Where rune characters were not available, the Elder Futhark was used to fill in the need as the Bergakker inscription is closest to the elder runic period.

The order of favour is identified as the Bergakker scabbard inscription as it is situated in the Batuwe region of the old Roman northern limes, in the Low Countries. It is the oldest inscription of the three from the 5th century and was found in a region of the Netherlands which was heavily Romanized, but still very characteristically Germanic its makeup. It was found near the site of a Roman altar stone dedicated to a Gallo-Germanic deity known as Hurstrga. For these reasons of age and location, the Bergakker inscription formulates the foundation of the reconstructed modern Frankish rune row. [1]

The reading of the inscription is given by Looijenga:

“[property] of Hāleþewaz: He grants the swords to the swordfighters”[2]

The Borgharen buckle inscription which is from the 7th century provides us with our B and O runes in the Frankish rune row. The finding is also most likely of Frankish, specifically Merovingian provenance, found near Maastricht in the Netherlands. The buckle was found in a common Reihengräberfeld (Merovingian row grave) along with many other objects of note. The place and contents of the grave indicate that the settlement was a Roman villa with a significant Germanic population. The reading of the inscription is a common Merovingian-style name:

The Charnay fibula has been somewhat controversial regarding a Frankish origin. The location of the finding is often cited as an Alemannic settlement. However, the dating of the fibula places it soon after the Burgundians were conquered by the Merovingians. We also know that a significant amount of Franks were settled in the region since the age of Clovis. Due to its richness in characters, it offers us a much to work with when building our TFA rune row. The reading of the inscription is:

The astute eye will notice that some of the characters are not typical of the shapes found in other rune rows such as those of Anglo-Saxon and Norse origin. For the sake of forming a unique compilation of original Frankish runes, TFA has put preference on these forms.

Gregory of Tours was no fan of Chilperic and often chastised his unconventional or even heretical ideas. He goes on to say this about the king:

The king wrote also other books in verse following Sedulius as a model. But those poor verses have no relation of any sort with meter. He also added letters to our alphabet, namely [omega] as the Greeks have it, ae, the, [upsilon, upsilon iota], which are written by the following characters: [omega] as [theta], a/e as [psi], the as [Zeta], [upsilon, upsilon iota] as [delta]. And he wrote to all the cities of his kingdom that boys should be taught these letters and that books written in previous times should be erased with pumice and rewritten.[5]

It is not inconceivable that the characters Chilperic was attempting to add to the alphabet were in fact meant to represent older runes, if not in shape, then in use. TFA Frankish Rune Row:

The runes below have had their names translated from the Proto-Germanic into Old Frankish: 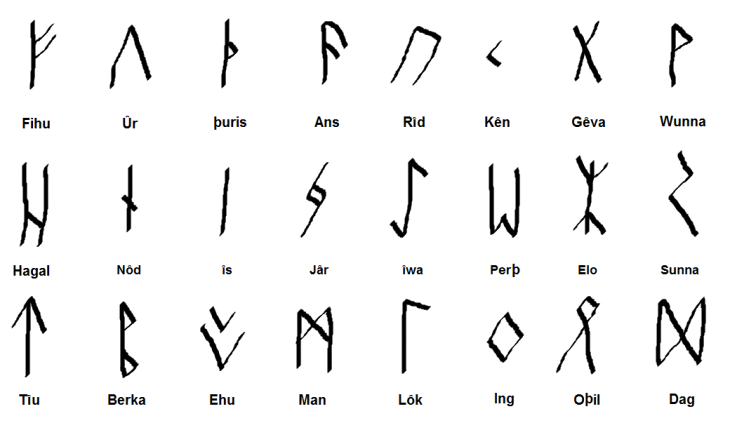 TFA uses the runes in the adorning of charters and edicts. Wherever “Thia Frankisk Aldsido” appears in a scripted charter or edict, these are penned in Frankish runes. You can view other examples by reading the Declaration of Reversion. Auguries and other forms of divination are common to modern Franks, should they feel so inclined to do so.

They are also used to adorn the Festuca of members of the Farbond, which are incised into the wood: