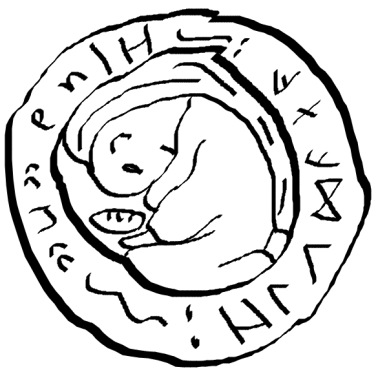 She who is Glory

Descending from the PGmc *hlūdaz meaning “fame, rumor”, in turn descended from the PIE *ḱlew- “hear”. This would hence relate to the Greek kléos or “glory”, which is featured prominently in the deeds of heroes throughout the Illiad and Odyssey. It has been claimed that the PIE craved a sense of immortality called *ḱlewos *ndhgwhitom, or “the fame that does not decay.” The name *Hludwig (Clovis) means “famed fight” and all other Merovingian *Hlud thematic names are related to the same concept.

Hludana is a goddess attested in the Netherlands and in the Rhineland near Cologne as well as Xanten. There are many theories on the meaning of her name and her functions, ranging from a connection to the Old Norse Hlodyn (Earth) or the German Holda, many of which are largely contested. In one epigraphic inscription, a vow was made to her by fishermen and for this she is seen as having affinity to the river and fishing, perhaps even commerce:

“To the goddess Hludana, the fishing contractors, when Quintus Valerius Secundus acted as tenant, fulfilled their vow willingly and deservedly.”

The relationship between fame and connections to the sea are well known in Germanic, Gallic and Roman sources. Oftentimes heroes are born of the sea, are found as babes floating on the sea, fight sea-monsters or are far travelled on the sea. The Franks were known from an early age to be known seafarers and pirates who disturbed the coasts of the Roman Empire. Here, Zosimus (Book I) makes mention of the Franks disturbing Greece:

“Ptolemais in Thebais having revolted from the emperor, and commenced a war. Probus, by the good conduct of his officers, compelled both that place and its allies to surrender. He likewise left in Thrace the Bastarnae, a Scythian people, who submitted to him, giving them land to inhabit there; on which account they observed the Roman laws and customs. But the Franks having applied to the emperor, and having a country given to them, a part of them afterwards revolted, and having collected a great number of ships, disturbed all Greece; from whence they proceeded into Sicily, to Syracuse, which they attacked, and killed many people there. At length they arrived in Africa, whence though they were repulsed by a body of men from Carthage, yet they returned home without any great loss. This circumstance likewise happened during the reign of Probus. Eighty gladiators conspiring together, and having killed their keepers, ran out into the city, and plundered all in their way, many other persons, as is usual in such cases, without doubt mixing with them. But the emperor sent a party and suppressed them.”

We also know that in the mythic cycles of the Franks, as recounted in the 6-8th centuries, the Franks were believed to have descended from Trojan heroes who came to wetland places after the fall of the city, such as in the Liber Historia Francorum:

“Let us make known the beginning of the kings of the Franks, their origins and the origins and the deeds of those gentes. In Asia there is the country of the Trojans, where there is the city called Ilium and there is where Aeneas ruled. The gentes were brave and strong, the men fighters and very rebellious, waging endless wars and conquering the neighbouring districts roundabout. The kings of the Greeks, however, rose up against Aeneas with a big army and fought him in a bloody conflict; many people of the Trojans fell there. And thus Aeneas fled and shut himself up in the city of Ilium. And they fought against the city for ten years. For, after the city was subdued, the tyrant Aeneas fled to Italy to establish gentes there for fighting. Others out of the leaders, that is, Priam and Antenor embarked on ships with the remaining of the army of the Trojans, twelve thousand [people], and departed [from Troy] and came to the banks of the river Tanais. Having entered the Maeotian swamps, they arrived within the borders of the Pannonias near the Maeotian swamps and they began to build a city as a memorial to themselves. They called it Sicambria and lived there for many years growing into a great people.”

“At this time, the depraved and evil gentes of Alans revolted against Valentinian, emperor of the Romans and the gentes. He then raised a very large army from Rome and went against them, entered into battle with them, overcame and conquered them. Having been defeated, they fled beyond the river Danube and entered the Maeotian swamps. Then the emperor said: ‘Whoever is able to enter this swamps and throw out this depraved gentes, I will concede them the donatory tribute for ten years.’ Then having gathered together, the Trojans prepared ambushes in the way they had been taught and knew and entered the Maeotian swamps along with the other people of Romans, and they drove the Alans out and cut them down with the edge of the sword. Then, because of the hardness and bravery of their hearts, the emperor Valentinian called them the Franks, which in the Attic language means fierce.”

Thus, it can be demonstrated that sea travel as well as dwelling in the northern Germanic wetlands, was an ancient custom of the Franks. As such, it makes perfect sense that their earliest understanding of divine-glory would also emanate from such a place and time.

In TFA, the concept of hlûd is therefore an ancient one that has been known since the founding of the oldest Frankish confederacies. The preeminent divinity who therefore rules over hlûd, the favours or follies of warfare, commerce on the sea and life in the swamps, is to be understood as Hludana.

In the reconstructed calendar of auspicious festivals – the Fîringatal (TFA) – Hludana is portrayed as the “giver or kneader of loaves” in exchange for war booty. She is also seen as the matron of other Rhineland matronae who also affect hlûd – the Idis. Under the Windarmânôth (Wintermoon), on the night before the Full Moon (Idisnaht) offerings of coins should be given to Hludana near a body of water of importance and proximity to the offering party. During the period between the night After the Full Moon until the next New Moon, the Idisthing is celebrated where it is auspicious to make household purchases as the Idis – under Hludana – are interested in the affairs of the household, seeing to the glory of the Hîwiski (family).